How Does It Work?

In order to understand how Neurofeedback works we first need to understand how the brain works. The systems that govern the human brain are the most complex and compact on earth.  In order for the brain to function optimally, the parts of the brain must talk to one another constantly.  The brain accomplishes this communication by transmitting electrical signals along neurons that connect one area of the brain to another.  The electrical signals are expressed as brain waves. Using non-invasive surface electrodes that are placed on the surface of the scalp, the system is able to translate these brainwaves on to a computer screen for observation.

There are five distinct brain waves:

Neurofeedback is also known as EEG Biofeedback.  Neurofeedback is actually a learning modality designed to retrain dysregulated brainwave patterns.  By doing this, the brain becomes more stable and is able to operate optimally and efficiently.  It is completely noninvasive and is considered by the Food and Drug Administration to be safe.  In fact the Food and Drug Administration recognizes that neurofeedback has NEVER produced a serious side effect since it was first discovered over 40 years ago.  Neurofeedback cannot diagnose or treat any particular condition per se but peer reviewed, published research has demonstrated its efficacy in managing many neurological conditions such as ADHD, ASD, Migraine and Tension Headache, Insomnia, Chronic Pain, Post Stroke Syndrome, Anxiety and Panic Attacks as well as many others. 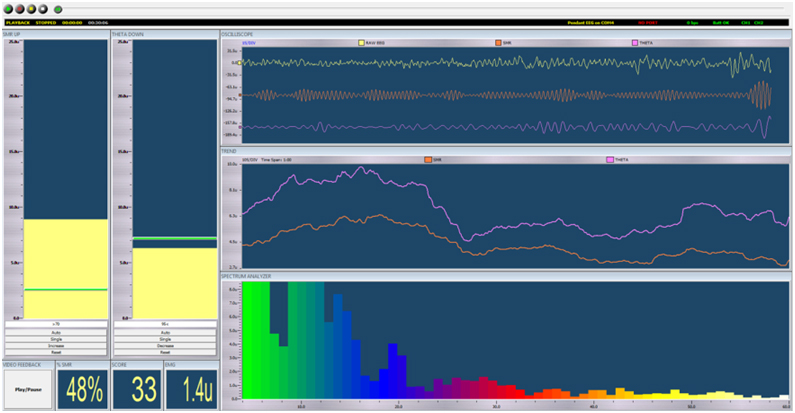 Neurofeedback is guided exercise for the brain.  All neurofeedback begins with a Quantitative Electroencephalogram (QEEG) evaluation.  The QEEG is an assessment tool designed to objectively and scientifically evaluate a person’s brainwave patterns.  The procedure consists of placing a snug cap on the head.
Embedded within the cap are 12 small sensors that are designed to measure and record electrical activity (or brainwaves) coming from the brain.  It is important to note that these sensors do not put any electrical current into the brain – they simply record signals coming from the brain.

Individuals are hooked up to a computer using wires and sensors and the computer records their brainwave activity. These sensors are noninvasive, as no electrical current is put into the brain.  The sensors simply record the brainwaves coming from the brain.  Information about these brainwaves is displayed on the doctor’s monitor.

The software automatically detects when the brainwaves are properly ordered and it feeds that information back to the client.  This feedback appears in the form of a game, movie, or sound which signals the client that the brainwaves are becoming more ordered. As long as the client’s brain waves are moving in an orderly direction, the puzzle pieces are filled in and the client hears a tone.  If the brainwave patterns move away from an orderly pattern, then the puzzle does not get filled in and no tone is produced.  The client is actually controlling the completion of the puzzle with their brain and by doing so; the brain is learning how to regulate itself.

In another design, the client performs the training while watching a movie.  In this case the client may watch a DVD movie that is being controlled by their ability to regulate their brainwaves.  The movie will get brighter as the brain waves normalize and become darker when they become dysregulated.  The brain’s natural desire to watch the movie clearly will drive those neurological circuits that normalize the brainwaves and allow the picture to be visualized.  The more those circuits are driven and used – the more neuroplastic changes take hold.  The client learns how to use those new circuits during the demands of everyday life.