Ready to Get Started? Call Today!

What’s really going on inside your brain?

The brain map, often referred to as a qEEG, is one of the most vital diagnostic tools available in the field of neurofeedback for use with people who have brain-based conditions.  Clients often comment that the information revealed through our evaluation describes their struggles or those of their child remarkably well.  They often comment that tests by other specialists didn’t turn up what was really going on the way the brain map did.  Many clients have been treated for years for something they didn’t have and given medications they probably didn’t need because no one looked at their brain function for the cause of their symptoms.

At INDY Neurofeedback, training is guided by quantitative analysis of your EEG patterns. The brain is incredibly complex.  We use sophisticated computerized analysis tools to study the brain’s electrical activity. This process is called quantitative EEG or qEEG.  Complicated mathematical and statistical analysis of EEG activity is a primary tool in neuroscience.  It is used in computational neuroscience research centers all over the world to study ADHD, autism spectrum disorder, depression and bipolar disorder, PTSD and other anxiety disorders, learning disabilities, and memory disorders such as Alzheimer’s Disease and other forms of dementia.  Via the qEEG, we are often able to identify the reason for your struggles.  It can show areas of the brain where there is too little or too much activity. It can also show when areas of the brain are not coordinating their activity properly.

And once we see it, we can target it for change with neurofeedback.

Our clinic utilizes single, 2-channel and 4-channel training incorporating both open eye and closed eye therapies as determined best for the client.  Neurofeedback is a method of training brainwaves to alter the structure and function to enable the brain to work optimally.  It’s a very powerful, predicable training intervention and is completely non-invasive.

Our user friendly, professional home neurofeedback training system allows unlimited training for one weekly fee.  This is a real neurofeedback system, on loan, in your home!  It is easy to use and safe as only our trained professionals can program your training and it allows us to review all sessions remotely.  Daily tracking logs keep us up-to-date with your observations/comments.  QEEG brain maps are required and must be performed in our clinic.  For those who qualify, this is a great option if you:

One of the great benefits of an optimally working brain is that is does not need the support of medication.  Most clients experience that through neurofeedback medications can be titrated to lower doses and often eliminated.  Neurofeedback therapy works to correct dysregulated brainwave patterns, therefore, effects of the medication(s) taken may present and/or become amplified as the brain begins to work in the manner it is designed to work.

As a courtesy to our clients and their prescribing physicians, INDY Neurofeedback consults with a specially trained pharmacist (knowledgeable in neurofeedback) to provide a report of how the prescription drugs currently being taken might be titrated down, in order to avoid/mitigate side effects.

The staff of Indy Neurofeedback are NOT medical doctors and DO NOT recommend any unilateral change(s) in prescribed medication(s).  The detailed report provided is solely informational to the client to assist a thorough conversation between the client and the prescribing physician.

Also known as “Slow Wave Closed Eye Training,” Alpha-Theta Training is an eyes closed therapy using sounds from a neurofeedback computer to guide the client into a relaxed “alpha-theta crossover” state.  This helps promote creativity and reduces stress, anxiety and tension.  It is often used for individuals to resolve deeper psychological or emotional issues.  During this training, emotionally traumatic memories can be released, allowing brain functionality to normalize.  Slow wave training takes clients to a 4 to 12 hertz window where they can access repressed memories and stressful or emotionally painful events if they are present.  Once the proper information processing loop is re-engaged, memories are no longer being stored in a reactive fearful or anxious state.  Alpha-theta training is also used for alcoholism and post-traumatic stress disorder (PTSD). In 1989 Eugene Peniston published his now famous study using alpha theta training to treat chronic alcoholics in an inpatient setting. He achieved an 80% rate of recovery.   Alpha-Theta is probably the most celebrated protocol for PTSD, addiction and peak performance.

Heart Math emWave Pro is a therapy program that collects pulse data through a sensor with software that translates the information from your heart rhythms into graphics displayed on the computer monitor allowing you to watch in real time how thoughts and emotions affect your heart rhythms. emWave Pro is based on decades of research and used by tens of thousands of people in over 85 countries. The heart and brain maintain a continuous two-way dialogue, each influencing the other’s functioning. The signals the heart sends to the brain can influence perception, emotional processing and higher cognitive functions. This system and circuitry is viewed by neurocardiology researchers as a “heart brain.”  HeartMath has published research demonstrating how HRV varies with age and gender and on the use of HRV analyses to assess alterations in autonomic function in conditions such as panic disorder and chronic fatigue. Studies using HeartMath techniques and technology have been published in many peer reviewed journals including; The American Journal of Cardiology, Harvard Business Review and Journal of Alternative and Complementary Medicine. 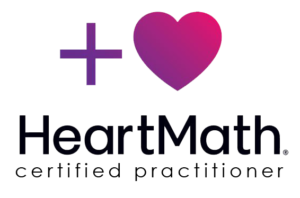 This biofeedback helps increase calm and improve clarity. Increasing the variability of the heart rate (your heart beat) in fact correlates well with more robust brain and heart health.

A brain tool for anxiety and stress and sleep. The brain functions electrochemically and can be modified by electrical intervention.

Over 200 studies to date have shown that CES increase the calming type of neurotransmitters within the brain, namely serotonin and endorphins. Clinical research over the past 50 years has shown that CES calms the mind, boosts relaxation, helps with sleep and improves mental sharpness and ability in general. CES is particularly useful in producing calm in situations like being at the dentist, while writing exams or struggling with the fast pace of work or school. CES also settles body discomfort.

Audio-Visual Entrainment (AVE) is a technique that provides pulses of light and sound at specific frequencies in the brainwave range.  AVE is capable of producing situational appropriate brainwave frequencies through the process of entrainment (the tendency of physiological processes to mirror environmental stimuli), increasing cerebral blood flow (blood flow in the brain), and increases the metabolizing of glucose in the brain for improved functioning of the neurons.  The combined outcome of these processes is improved mental performance.

Many users of the ‘Mind Alive DAVID Delight with the muti-color eyeset’ have reported experiencing:

A personal AVE unit is included in our protocols for your at-home support.