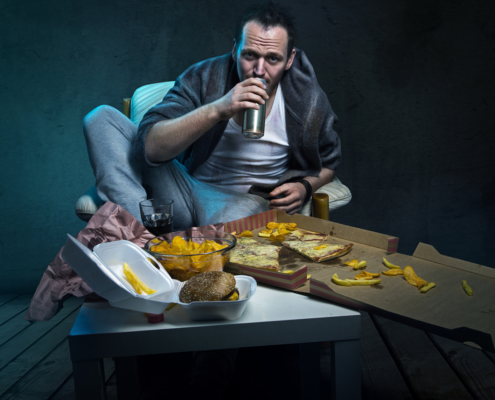 American diets have been connected to a number of health issues from obesity to cardiovascular disease. But new joint research between the U.K., Australia and the U.S. has finally identified why our diets are so bad for us and why we’re putting on weight.

Researchers found that when otherwise healthy young adults followed a typical western (U.S.) diet for seven days, they tended to perform worse on memory tests and craved more junk food. That may be because the food we typically eat actually disrupts proper function of the hippocampus, a region in the brain important for memory retention and food regulation.

“After a week on an American-style diet, snacks and chocolate become more desirable even when subjects were full,” according to a Macquarie University study director in Sydney, Australia. “Our diets make junk food harder to resist, leading us to eat more, which in turn generates more damage to the hippocampus and a vicious cycle of overeating.”

For the study, researchers split 110 lean and healthy students between the ages of 20-23 into two groups: one group ate their normal diet for a week, while the others were given a diet including processed snacks and sugary foods. After eating each meal, participants indicated how much they liked the food and whether they wished to eat more of it.

Interestingly, desiring more food and liking a particular type of food dramatically changed in participants following the western-style diet. Researchers found that the more appealing food samples were to test subjects, the worse subjects did on brain tests such as memory retention. These new study findings strongly resemble previous studies, which exposed a link between hippocampal function and junk food.

Leanne O’Neil, owner of INDY Neurofeedback, finds these connections troubling. “Some of the food we are regularly putting into our bodies is actually disrupting brain function and encouraging over-eating. No wonder Americans have such a hard time fighting weight gain and obesity.”

At INDY Neurofeedback, we are happy to help you restore healthy cognition and eating habits.